Portrait Tips: How to pose couples

I hate to break it to you, but making pictures of one person is easy. It’s level one, beginner, easy-cheese. When you add another person, it becomes a lot harder — much more than twice as hard.

Right now I’ll just give you one simple tip for how to pose couples. And it’s great because it simply brings them closer together.

How to pose couples together

The trouble with posing couples is that real people aren’t shaped like sticks. We have shoulders, hips, waists and feet which conspire to keep us apart in pictures.

We’ll use this picture as an example. This couple is married and they work together, so we need a professional portrait. Making intimate portraits of two people is a lot simpler because you can pose them however you like and tilt the camera, etc. For professional portraits, we typically limit the public displays of affection but still need them close together.

Pose for the eyes

Standing side by side, heads end up pretty far apart, which is the obstacle you need to overcome. These two need pictures that will fit as profile portraits online and on business cards, so I can’t have their faces far apart. Eyes are the most important thing in a portrait, so we also need them positioned in an interesting part of the frame.

So, we need the heads together and the eyes in a great spot. If they crop the photo to a square, we don’t want them to end up with their faces far to the sides with a big empty space in the middle. It’s still got to be an intriguing composition. Also, you’ve got to get their eyes close enough to the same plane so they are both in focus. 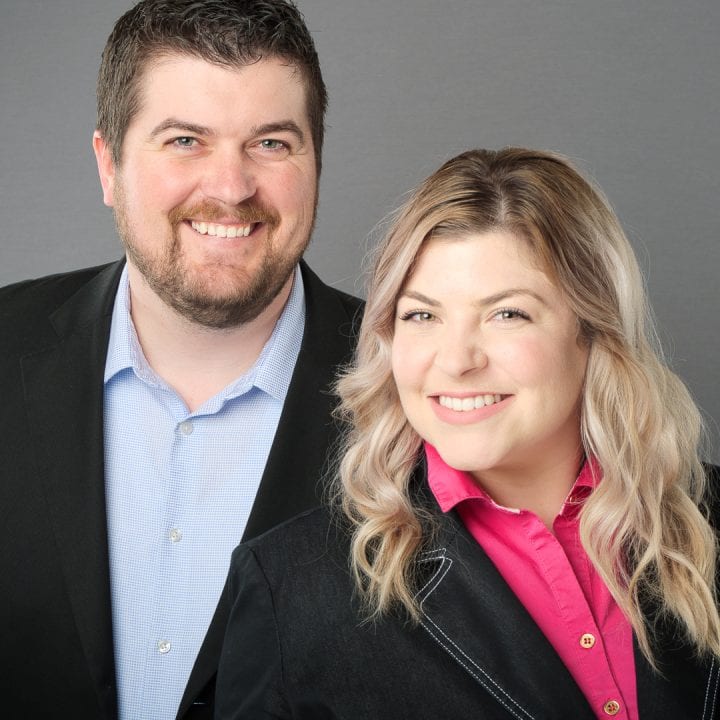 The key to doing it is to have them stand a little apart and then lean their bodies together. Start with the shorter of the two, in this case, Monique. She is standing with her hips facing the right of the frame, her right foot is pointed toward the camera, and her left foot is pointed to the wall. She is standing with her weight on her right foot and leaning toward the camera a little.

Now let’s put Mike in there. He’s a lot taller, so his stance is wider to reduce his height. He’s basically posed in the opposite stance as Monique. His left foot is bearing most of his weight, and it’s positioned just behind Monique’s. when he leans forward, it puts his face over her shoulder but keeps his hips back so he’s not pushing against her.

The key is to make sure that Mike is not “peeking” over her shoulder. Have him lean his whole body forward, not bending at the waist, which looks terrible. It may take a few tries to get Mikes in just right the spot. It’s key, though, to getting his face into the focal plane so his eyes are in focus.

Focus on the eyes that are closest to the camera. adjust the aperture until both faces are in focus.

The best thing you can do when posing couples is to explain what you’re doing. When they understand that this stance will help them both look engaged and flattering in the picture, they’ll be happy to help. Communicate the problem about hips and shoulders keeping faces apart. Your subjects will be happy to help you make the best picture possible.

Portrait Tips come out each week, and you can see them all right here. 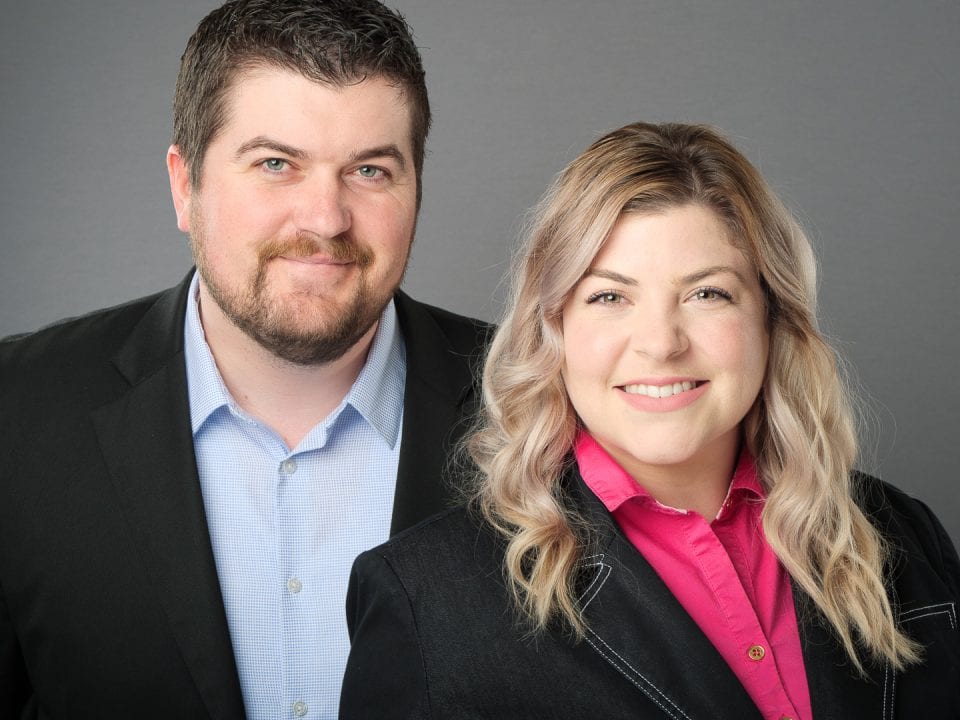 Hi Levi, Thanks for your thoughts on posing couples. What do you think about lighting them?

That’s a great question, Sean —and a good topic for another post ;)

The short of it, light to make the woman look her best. 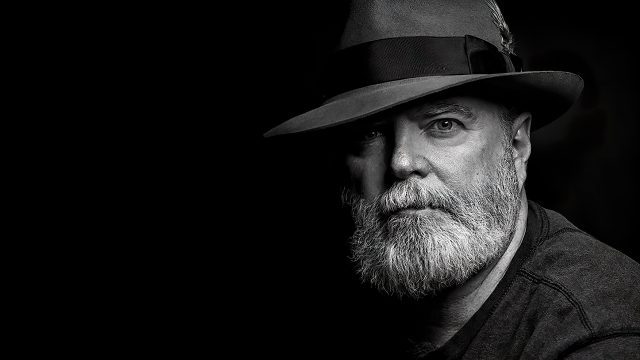 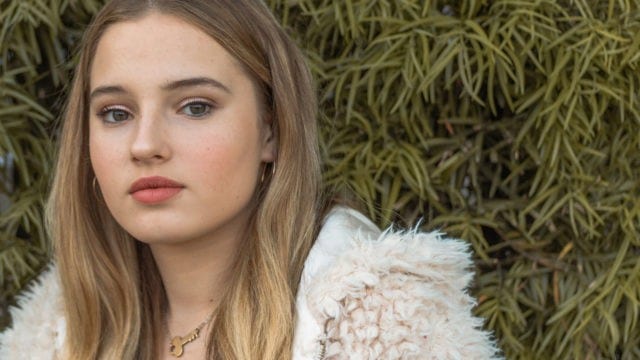 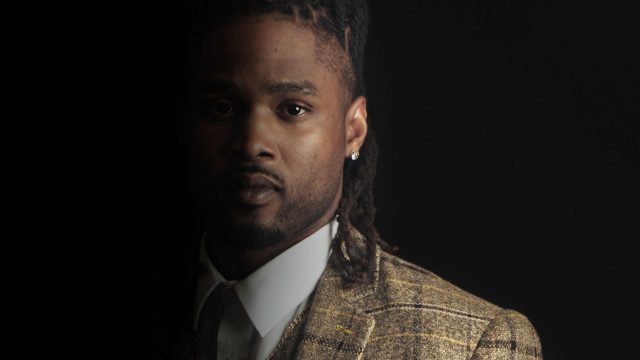 Split lighting for a dramatic portrait 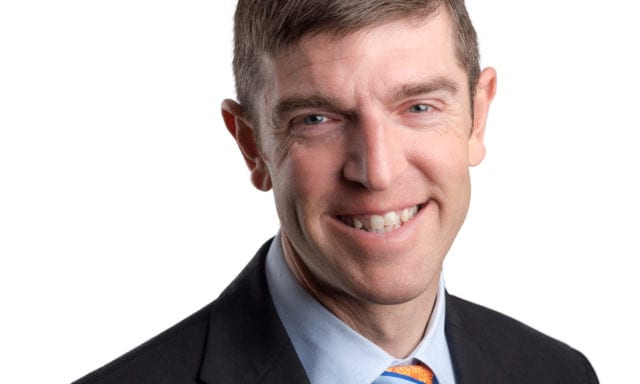 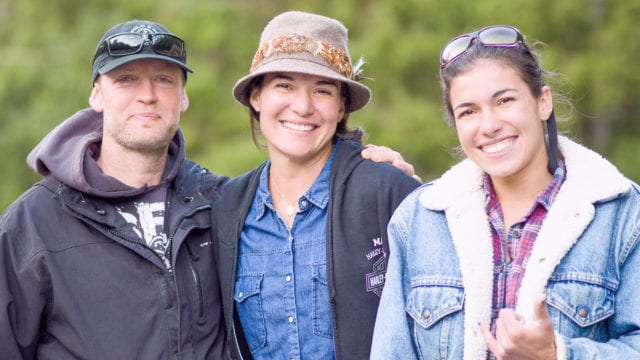 Portrait Tips: The simplest way to get a great background anywhere