Lessons from the field: Putting the experience first

(Editor’s Note: We welcome Sara Kempner to Photofocus. Sara is an outdoor photographer specializing in fine art landscapes, lifestyle and sport and recreation imagery. She is based out of the Comox Valley, BC, Canada. When not taking photos you can find her on her mountain bike or snowboard while out enjoying all that Vancouver Island has to offer.)

This summer, the photography world was abuzz with Comet Neowise gracing us with its presence in the night sky, coming within a mere 64 million miles (or 103 million kilometers) of Earth and visible to the naked eye. Everywhere you looked on social media there were epic photos of the comet over various parts of the world, its branching tail streaking majestically through the sky.

Since I was too young to fully appreciate Hale-Bopp in the late ’90s, I knew that I too would have to venture out and try to capture this unique phenomenon before it disappeared for another 6,800 years.

I picked a night where the forecast looked promising and I bribed my husband Shane with a couple of beers to come and join me on the late-night adventure. Having him there ensured that I could focus on shooting, not on all of the little noises in the bush that become amplified when you’re alone at night in the forest. We live on Vancouver Island, BC, which happens to have the highest concentration of cougars in the world so I definitely prefer to have a buddy for night shooting, more for peace of mind than anything.

We got into the car and took off around 11 p.m., fighting off the instinct to crawl into our warm, cozy bed. I drove us about 40 minutes away to the base of a former ski hill behind town. The road up was rutted and rough but I knew it would be worth the jarring drive once we got there.

The previous night there had even been reports of some Aurora in the area, (not common for where I live) so in my mind I was going to get an epic shot of Neowise and the Aurora overlooking our town. This image would go viral, sell like crazy and help launch my career. It was sure to be the perfect night!

We got out of the car and started hiking the steep, rocky path upward to gain some elevation above the tree line. Not too far into the hike I came to a jolting stop, realizing that something didn’t feel right. My pack felt light. Sure enough, to my utter embarrassment and horror, I’d left my tripod leaning in the doorway at home.

Other than my camera, my tripod was the next most important thing I needed for astrophotography. There was no way to take the long exposures needed to capture the night sky without it. I couldn’t believe what a rookie mistake I’d made!

After a couple of minutes of self-loathing and cursing, I decided we might as well continue on. I had promised Shane a spectacular view to drink his beers at and I had to see if I was missing the epic photo opportunity that I’d built up in my head. Headlamps ablaze and me still cursing under my breath, we continued up to the viewpoint I’d scouted out previously.

As we arrived at the top and took in the view below us, I let out a sigh of half relief and half disappointment. As fate would have it, there was a low-lying band of clouds over the horizon that was covering Neowise. The Aurora weren’t out at all. My husband sat in his folding chair and enjoyed his beers with a view over the whole town.

Determined to capture at least one image, I balanced a boulder on top of a tree stump, and then gently placed my camera on top of the rock. Using some gear from my bag, I managed to prop my camera up and carefully set an exposure. I got a picture of Shane in his chair, an image I titled “Brew with a View.” For the next couple of hours we sat and enjoyed the quiet of the night together.

While the evening didn’t turn out as I’d planned, I couldn’t be disappointed. I got to take my husband somewhere he’d never been and we shared the experience of watching shooting stars over our town, feeling like we were up above the whole world and totally alone in nature.

One of the biggest lessons photography has taught me is to always put the experience first, and the capturing of images second. I could have easily had a hissy fit and gone home when I realized I’d forgotten my tripod. But, a good adventure always comes first, and any time spent out in nature is a win for me.

The photo I took is not technically sound, and is far from my best work. But in the future when I look at it, I will remember the beautiful night we had together atop a mountain, not the potential shots that I missed out on.

And, hopefully, it’ll also be a reminder to never forget my tripod again! 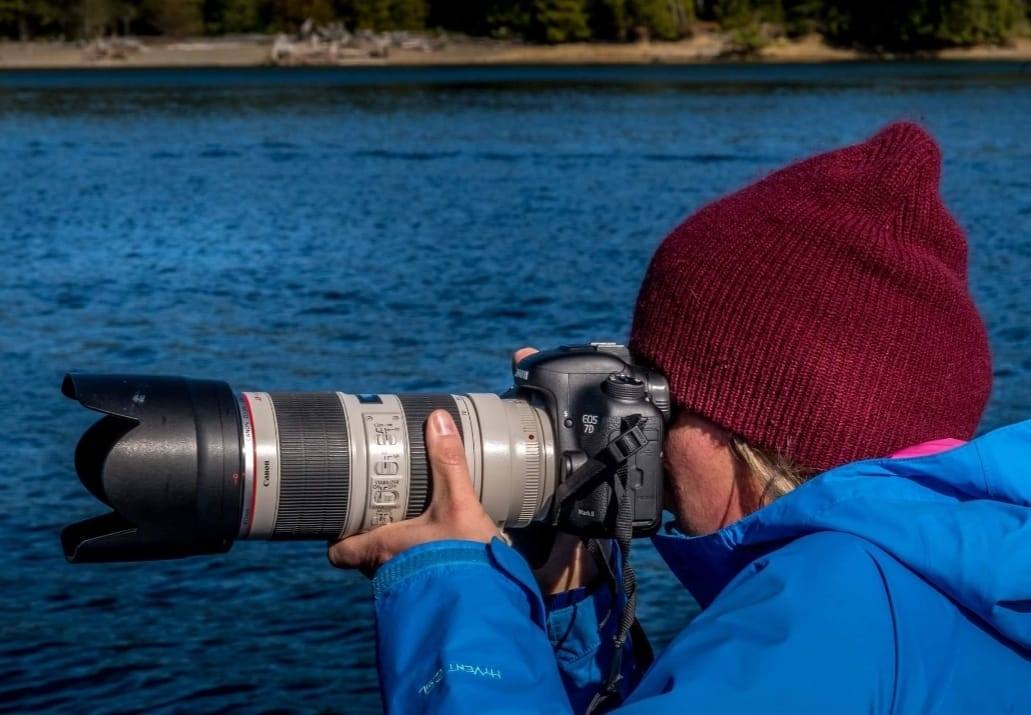 How I got the photo: Comet NEOWISE

Seven tips to help you photograph the NEOWISE comet

CrossFit: Returning to my roots

It definitely is about the experience. Seems like your husband has taken that to heart. Nice save without the tripod all the same. And welcome to Photofocus!

Hi Ken, apologies for the delayed response, obviously I’m still learning the ropes here and just saw your comment! I appreciate your feedback and look forward to being a part of the team. Cheers!

I really enjoyed this article! It was really nice to hear such an honest and personal story to get an idea of behind the scenes of what the diehard photographers go through! Your pictures are beautiful.

Hi Shannon. I’m so pleased that you enjoyed the article. Thank you for your feedback!

Thank you for sharing this “oops” moment. It makes me think I’m not the only one to make mistakes like this. I think you are very right to value the experience over the resulting image. This outing will be one you will remember and talk about for a long time.

I’m glad you enjoyed and could relate! Yes, there’s definitely no learning without making mistakes along the way…

It happens to the best of us ! Great article

Enter to win a new camera, an education bundle, plus much more!

Plus, by entering you’re automatically eligible to win one of our monthly prizes. This month we’re giving away an educational bundle, with. courses from Joel Grimes and Serge Ramelli. You’ll also get a free one-year membership to ThinkTAP Learn!